Hello @stungeye! I read that you're part of Open Democracy Manitoba and thought you might be interested about a project I'm working on :-)

It began with this tweet. On replying I learnt of Richard’s plan to tour Canada promoting democratic engagement. This past summer, in cities across Canada, Richard modeled civic engagement as an art form, curating discussions about Open Government with public servants, programmers, journalists, entrepreneurs, and citizens.

Open government is the governing doctrine which holds that citizens have the right to access the documents and proceedings of the government to allow for effective public oversight. source: wikipedia

On August 11th 2014 Richard Pietro’s Open Government Tour (OGT14) attracted a crowd to the Millennium Library in downtown Winnipeg. The event was sponsored by Open Democracy Manitoba, and hosted by Community News Commons and the Winnipeg Public Library. 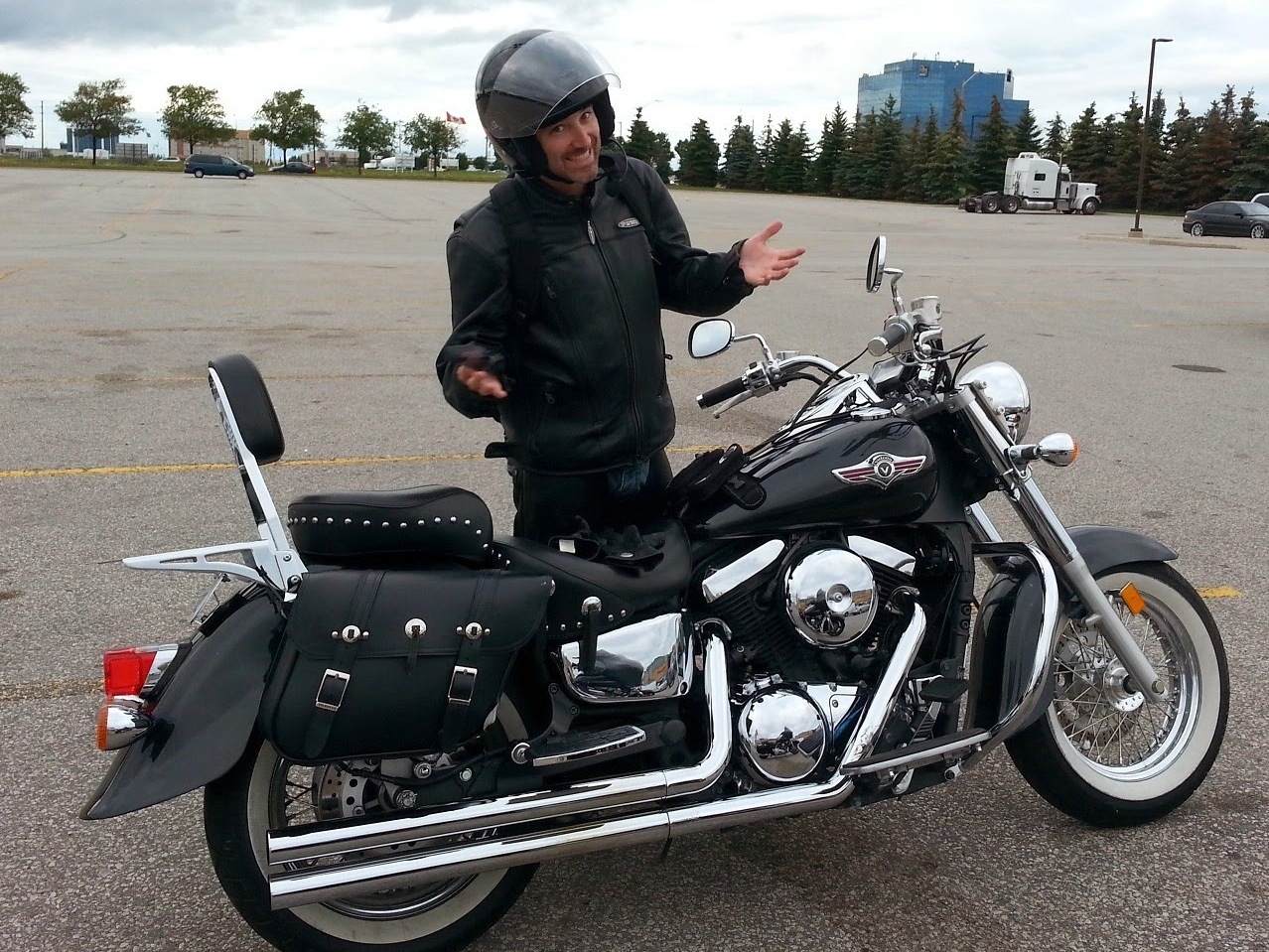 Above: Richard Pietro with the motorcycle he drove across Canada raising awareness about the Open Goverment movement.

Although we’d spoken during the video chat planning sessions with other OGT14 “City Champions”, I first met Richard in person the day of the event. Fellow ODM member Ken Harasym and I met him in the morning at a motorbike shop on Pembina, followed by breakfast at the Pancake house. Despite the bike problems he was dealing with Richard was in good spirits. With his bike out of commission, I voluteered to chauffeur him around for the day. This meant I was able to join him discussing Open Government and Open Data with Dahlia Kurtz on her CJOB radio show. We also got to spend the day chatting and getting to know each other.

The Winnipeg OGT14 event was co-moderated by Richard and myself (Kyle Geske of Open Democracy Manitoba). The evening started with Richard defining Open Government and Open Data and why they are important, with the help of a few memes.

The crowd was eager to hear Richard and guests introduce the Open Government movement while discussing local Open Gov / Open Data ideas and initiatives. A number of city journalists and three mayoral candidates for the 2014 Winnipeg Election, Brian Bowman, Robert-Falcon Oullette and Judy Wasylycia-Leis, were in attendance along with 70+ engaged citizens.

The first panel of guests included Mary Agnes Welch of the Winnipeg Free Press, Colin Craig of the Canadian Taxpayers Federation, and Dennis Lewycky of the Social Planning Council of Winnipeg. We were also joined by Keith McDonald from the City of Toronto’s Open Data team via Skype.

When asked by audience member Dan Bernardic about what all this means for the average citizen, I tried to express what I see as the importance of Open Government. That government accountability isn’t something that comes pre-packaged with a democracy. We the citizens are the accountants, but accountants need their spreadsheets. ;)

Second Half: Meeting the Makers

Kirk also fielded a number of questions from the journalists in the audience regarding the city’s randomization of locations details in their open datasets.

Richard’s Summary of the Winnipeg Event

Kyle Geske, Ken Harasym, Jody Gillis, Andrew Burton, Tessa Vanderhart, and Noah Erenberg were the folks that brought the #OGT14 Winnipeg event together and man, they couldn’t have been more awesome, and for so many different reason.

First, we had the perfect venue, awesome invited guests, lots of food, a dedicated person live tweeting the event, PLUS two cameramen capturing the event. The event ran like clockwork and afterwards the organizers told me their group had never organized an event before! If that’s the case, I can’t wait to see how good their events become once they become seasoned veterans lol.

The event was live-tweeted by Tessa Vanderhart. Tessa’s currated collection of tweets from the evening is no longer available (the Storify platform no longer exists) but her tweets can still be seen by following this link and scrolling down to tweets from August 11, 2014. The tweets are in reverse-chronological order, so you may wish to start at the bottom.

On September 6th we held a smaller Open Government Tour event when Richard stopped in Winnipeg on the return leg of the tour. This event was much more informal that the previous one. We gathered at Cousin’s Deli and discussed Open Government over a few drinks. Richard gave us a recap of the western Canada portion of the tour. We also discussed the dataset available on data.winnipeg.ca and how best to promote Open Government as a citizen.